Thought you all might like to know what's on the bike in the picture. It's ready for two months+ on the road for two people camping. The various "bags" are used to group things conveniently. The "knapsack" is one I picked up in the early 1980's and added ropes to for tying to my rack and over the rest of the items. If you have any questions about any of the items and why it was useful, add a note. 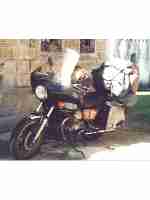 But... it would be more transparent, if you added commas.

So, why is it important to have silk T-shirt?
And why grey sweater... is it ok, if it's black?

Maybe you could upload a bigger one, so we can see the bike packed.

Here are the instructions for hosting and posting images on the forum:
https://guzzi.slovenianforum.com/tehnini-recepti-in-koristne-povezave-f17/prironik-za-dodajanje-slik-na-forum-t28.htm

Let me know if you get lost in the process

And to think some people need goldwings or maybe golwings with trailers *barf*...

But... it would be more transparent, if you added commas.

So, why is it important to have silk T-shirt?
And why grey sweater... is it ok, if it's black?

The knapsack has three pockets on each side: Right Top (RT), Right Middle (RM), Right Bottom (RB), etc. The things in these pockets are there for easy or immediate access.

The silk long-sleeved t-shirt is for cold weather, to put on when dressing in the morning. I think they're made for skiers and they're great. Not bulky and really warm. The grey sweater is thin wool and is available for when it rains or the day gets cold, but not cold enough for the jacket liner. Black is ok, I guess, but it should be a thin one.

The "transparency problem" is due to my list having a couple of sections set out in a table that uploading the text file didn't include. You can figure out the headings (Wayne's stuff, Lili's stuff) and read roughly down to see what's in each category. The "detail" is due to leaving stuff behind that I wanted during trips and had forgotten. It was always fun to get out the list and start assembling everything.

When I was teaching in Canada, I'd assemble everything and pack over the Canada Day weekend (July 1) and leave on Monday when the tourists had cleared out of the national parks and were off the roads. I'd come home from touring across Canada or down the California coast around August 29 and start work again after the Labour Day weekend (September 1).

P.S. If anyone wants the list as a Word file, send me an e-mail.